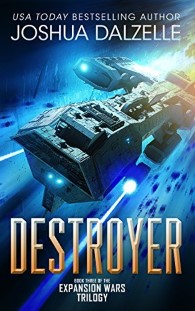 This review is written with a GPL 4.0 license and the rights contained therein shall supersede all TOS by any and all websites in regards to copying and sharing without proper authorization and permissions. Crossposted at WordPress, Blogspot & Librarything by Bookstooge’s Exalted Permission
Title: Destroyer
Series: Expansion Wars #3
Author: Joshua Dalzelle
Rating: 3 of 5 Stars
Genre: SF
Pages: 336
Format: Digital Edition

The mystery Spectre ship has been hitting secret Federation outposts that not even most of the Federation knows exists. When the Tsuyo Corp puts pressure on the Fed Congress to not respond, Admiral Wright and her superior Pitt, are both very suspicious. Jackson Wolfe is let off his leash and given direct orders to find and destroy the Spectre.

He saves the sentient AI computer and it comes up with the idea that the Warlord controlling the Spectre is trying to gain control of all the former Phage ships lying around. This would allow the Warlord to pretty much rule Darshik and Human space uncontested.

Wolfe ends up having to sacrifice the AI to take out the Warlord and his Spectre. Now that the Darshik threat is taken care of, the Feds can begin to concentrate on the Eastern Star Union.

This was just like all the previous Expansion Wars books. Thankfully, Dalzelle sidelines Celesta Wright and as a very small side character she is great. Dalzelle just can’t write more than one character at a time and Jackson Wolfe takes his attention. It’s an obvious weakness of Dalzelle’s and considering it is manifested in his Omega Force series as well, it’s just something I as a reader will have to put up with.

The story was kind of blasé to be honest. It felt like this whole “trilogy” really should have been one longer book. While the trilogy storyline was pretty good, the particulars of each book fell kind of flat. The Darshiks and the Uushins just weren’t very threatening and while the Warlord and the Spectre made a great villain, he wasn’t giving much time as a “character”. I think there would have been a lot more tension if the “mystery” of the Uushin and the Darshik had never been and the Warlord had taken centerstage. I mean, a brainship? That is just cool.

I know I complained a lot. I still enjoyed this, but it was more of an “it’s ok” enjoyment than a “Awesome, what a great book” enjoyment.

I do know that with the next Black Fleet related trilogy that Dalzelle writes, I’ll be passing on reading each book as they come out. I’ll just wait until the Reunification Wars trilogy is done and read them all in a row. I’m hoping that reading them closer in a row will allow for a better experience, kind of like what I had with the original Black Fleet

This review is written with a GPL 4.0 license and the rights contained therein shall supersede all TOS by any and all websites in regards to copying and sharing without proper authorization and permissions. Crossposted at WordPress, Blogspot, Librarything & Tumblr by Bookstooge’s Exalted Permission
Title: Iron & Blood
Series: Expansion Wars #2
Author: Joshua Dalzelle
Rating: 3.5 of 5 Stars
Genre: SF
Pages: 362
Format: Digital Edition

The Darshik have declared war on the Federation and taken over the star system Juwel and its single human occupied planet of Juwel.

A force of Marines reached the planet’s surface but none of their supplies did. Jackson Wolfe must run the barricade that the Darshik have set upto deliver vital supplies if the Federation wants to keep Juwel under their control.

A taskforce, under the control of Edward Rawls, is tasked with providing support to Jackson to give him fighting support. It was supposed to be led by Celesta Wright, but she has been pulled to transport the Federations top diplomat to another meeting with the Ushik.

Rawls’ cowards out, leaving Jackson high and dry. The Ushin ship is destroyed by a stealth Darshik ship so Celesta heads back to support Wolfe. Everyone fights and kicks the Darshik’s butt. They also discover a huge construct on the planet, which appears to be a Quick Terraforming Device, ie, it will only take 10 years to convert the atmosphere to something the Darshik can use.

The Federation Wins. And it is revealed that the Ushin and the Darshik are the same species but controlled by very different ideologies.

I hate to say this, but I think that Jackson Wolfe is back into the storyline. While the plot was split between him and his protege Celesta, it “felt” like he had a greater part. Dalzelle really tried, in the previous book, to create another “hero” character with Celesta Wright but he just didn’t have the same handle on her that he had on Jackson Wolfe.

Don’t get me wrong, I really like Wolfe. He was what drew me into Dalzelle’s writing with his Black Fleet trilogy. But a really good author can create another character and still keep you invested. I think that Dalzelle is a good author but has not yet reached that “really good” peak yet. I was really hoping he’d break that barrier and that Celesta Wright would be someone who could carry the story on her own shoulders. She was more of a really good supporting character this time around.

The space battles were pretty good. Having the super-stealth Darshik ship was awesome and I really liked how the characters reacted to having such a threat around. There was a tiny bit of ground based battles with the marines and some Juwel militia against the Darshik, but it wasn’t much. I’m a ground forces kind of guy, so more on-planet fighting would have been nice. However, the main characters are all starship captains, so ground fighting is not going to be a thing.

Right on the covers of these books it says it is a trilogy. I suspect that there will be another trilogy after this to wrap this storyline up. You just can’t start an interstellar war in book 1, scratch the surface of it in book 2 and wrap up things in book 3. That might have worked with the Phage in the Black Fleet trilogy, but that was a different series. But I am looking forward to the final book in the Expansion Wars trilogy, whenever it may come out. 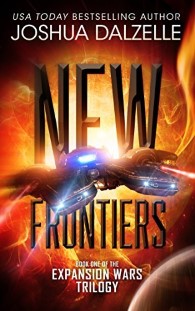 This review is written with a GPL 4.0 license and the rights contained therein shall supersede all TOS by any and all websites in regards to copying and sharing without proper authorization and permissions. Crossposted at WordPress, Blogspot & Librarything by Bookstooge’s Exalted Permission
Title: New Frontiers
Series: Expansion Wars #1
Author: Joshua Dalzelle
Rating: 3.5 of 5 Stars
Genre: SFF
Pages: 274
Format: Digital Edition

Humanity has survived the Phage. Unfortunately, the old Confederation breaks apart due to various members involvement in attracting the Phage. At the same time that humanity is fracturing apart, 2 new alien species suddenly appear. One wants to be a partner with humanity. The other was in thrall to the Phage and worshipped it. So they want to destroy the creatures that killed their god.

Celesta Wright, Jackson Wolfe’s protege, has been sent out to explore and then in a joint military venture with the allied aliens against the genocidal ones. Problem is, it turns out the two alien races are in league and it is a vast trap to destroy humanity’s space fleet capability so that we can be gobbled up at leisure.

Bucking command and taking risks, Wright saves the fleet and on her return finds that Jackson Wolfe has been reinstated in the military, against his wishes. Politicians are playing their games even while humanity is once again facing extinction.

Where’s a good Theocracy when you need it?

This was a decent successor to the Black Fleet trilogy.

Unfortunately, I didn’t enjoy it quite as much. There were several instances of people just doing stupid things. It wasn’t just the politicians either. That always brings things down for me.

The space action reminded me a lot of the space battles in Jack Campbell’s Lost Fleet series. Sometimes I miss the zam zoom space lasers and explosions of Star Wars’esque battles. “Physics” is only SO enjoyable.

Since this is going to be a trilogy and not an unending series, Dalzelle had better get the story in gear and move things right along. This book felt like setup for another set of hostile aliens to fight humanity. Better be good.