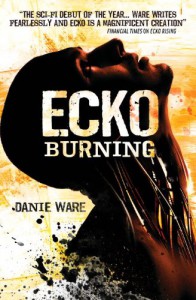 Ecko, a cyber rat from London, is in some virtual world that he is convinced is being used to simply change him. The other virtual characters end up being more real than he thinks and he gets a good lesson that the world doesn’t revolve just around him.

I read this thinking it was book 1 until the end of the book. However, even with that being said, it wouldn’t have changed my review one bit.

What I liked about this book:

1) Ecko.  Ecko is a whiny, self-absorbed, selfish potty mouth.   Oh my goodness. He uses nothing but the F-bomb and Christ’s name in vain in almost every sentence that he talks or thinks. He is your typical teenage boy on their most mopey day and is just generally unpleasant. Thankfully, we don’t get just 500 pages of him as he seems to be a minor character even though he isn’t.

2) All the other characters. I didn’t like anyone because of the next 2 points.

3) Everyone was run and controlled by fear. Up until the 70% mark, everyone simply reacted or froze in just about every situation. Trained warriors just froze up! Every thought [and we get a lot of those as we are in the characters’ minds a lot], every action was in response to something the character was afraid of.  Male, female, warrior, clerk, leader, follower, it didn’t matter. It was like a plague of indecision and it disgusted me. It made no sense and while it was the author’s intent, I’m not sure what Ware was trying to accomplish besides show that the world was inhabited by cowards and losers.

4) The denseness of the characters. Nobody can figure out anything.  They wonder, wonder, wonder but never actually form any conclusions. All the while being afraid. And we get a first row seat to the viewing. Ware seemed to go out of her way to obfuscate things and then make the characters not get things that were relatively clear. I don’t enjoy that.

5) The writing style. There was a LOT of description that didn’t need to be there. It doesn’t matter that a side corridor, that nobody goes down or that we ever see again, is described in great detail.  Also, a lot of things were in triplicate. The rage I felt at this was like a river of lava. Red molten rock flowing. Hot and burning anyone who came near. It was irritating, like a mosquito. Because this book was a whole SWARM of them.

I was going to DNF this at the 10% mark, but I kept hoping that things would change. Sadly, they never really did. Which goes to show that one should listen to their gut instinct when it comes to books one isn’t liking. The only good thing to come from this is that now I won’t ever waste another second on another Danie Ware book.