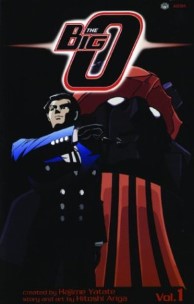 This review is written with a GPL 4.0 license and the rights contained therein shall supersede all TOS by any and all websites in regards to copying and sharing without proper authorization and permissions. Crossposted at WordPress, Blogspot & Librarything by Bookstooge’s Exalted Permission
Title: Big O, Vol. 1
Series: Big O #1
Author: Hitoshi Ariga
Rating: 3 of 5 Stars
Genre: Manga
Pages: 216
Words: 7K

We are introduced to Roger Smith, Big O, Beck and Paradigm City.

Roger has several encounters with Beck, where Beck tries to blackmail the city for 5 billion dollars so he won’t destroy some memories, another where he uses an electricity eating bug to try to destroy Big O in revenge for the previous escapade and finally where he kidnaps R Dorothy and uses the Dorothy I megadeus to try to rob a bank. Every single one is foiled by Big O and Roger Smith and Beck seems to have it in for Big O.

I took a quick look at wikipedia and the Big O manga was started several months before the anime, probably to try to drum up excitement for the anime. With that in mind, I wasn’t surprised when this was a real hash of old and new material. The first story about holding memories hostage was all new, the electricity bug story had overtones of the electric eel monster and the R Dorothy story was pure re-tread.

The art was different. Very similar, but not the iconic Batman: The Animated Series like the anime. It was too bad, because that art worked so well. The Big O too was not shown to the best and besides being big and having some big fisty arms, didn’t have much presence. The biggest difference was Beck playing such a major villain. In the anime he’s a 2bit loser who occasionally annoys Roger. Here, he’s still an annoying 2bit villain, but he’s the main villain and he doesn’t even try to be corny/funny like in the anime. The perennial loser villain.

The biggest issue is the 40 year memory loss. In one page, Roger relates how people still show up without their memories, and the main event happened 40 years ago. But, most of the people trying to get their memories back aren’t even close to 40, so they shouldn’t have had any to lose. Or regain. If the time frame had been changed to 5, maybe even 10 years, then I could accept things better. It really feels like the 40 should have been 4 and something was seriously lost in translation.

Not an auspicious start for this manga series I’m afraid.

My thoughts about the books I read