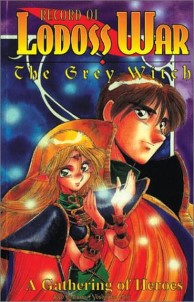 This review is written with a GPL 4.0 license and the rights contained therein shall supersede all TOS by any and all websites in regards to copying and sharing without proper authorization and permissions. Crossposted at WordPress, Blogspot & Librarything by Bookstooge’s Exalted Permission
Title: A Gathering of Heroes
Series: Record of Lodoss War: The Grey Witch Saga #1
Author: Ryo Mizuno
Artist: Yoshihiko Ochi
Rating: 3.5 of 5 Stars
Genre: Manga
Pages: 214
Words: 7K

Chapter 1 introduces to the world of Lodoss and how a generation ago 7 heroes fought against the dark god and re-chained him. That story is told by a blind bard to an elf named Deedlit. They are then attacked in daylight by goblins, something unheard of. We then switch to the dwarf Ghim, who is taking leave of Neese, a high priestess. Neese’s daughter Leylia was kidnapped 6 years ago and Ghim means to find her and rescue her. We are also introduced to Parn and Etoh, a young knight and priest respectively. Parn has seen goblin attacks in his recent journey and is trying to rouse the villagers in defense. They ignore him so he and Etoh go after the goblin band themselves.

Chapter 2: Parn and Etoh fight the goblins but only succeed because Ghim hears the sound of fighting and helps them. Parn is wounded with a poison knife and Ghim takes him to the sorcerer Slayn for healing. Slayn apparently knew Parn’s father in the past. They all decide to go on a quest to find out why the goblins are active in the day. We switch to the city of Kanon, where a castle lies. Guards see a fleet of battleships approaching from the dark island of Marmo. The sorceress Karla appears and destroys the fortress, allowing the fleet to unload all of its warriors. Last off the ship is Emperor Beld, one of the 7 heroes, who has become an evil villain.

Chapter 3: Beld reveals to Karla that he intends to rule the entire island of Lodoss. Parn and Co are now in Allan, capital city of Allania, one of the kingdoms of Lodoss. The kingdom is celebrating the birth of the new heir. Parn sees a woman being attacked and comes to her rescue, only it turns out to be the elf Deedlit, who takes care of business all by herself. Parn is instantly smitten. Slayn meanwhile visits his old university only to find it abandoned and neglected. Deedlit takes Parn out to dinner as thanks for stepping in. We see Woodchuck, a thief just released from prison, picking a pocket and running away.

Chapter 4: We see Woodchuck making some sort of deal with the Thieves Guild. Deedlit brings a drunk Parn back to his inn and she meets Slayn. The next morning Slayn relates his discoveries of his old school and how it was destroyed by a former student, one Wagnard, who turned to black magic and was expelled. Wagnard learned some powerful magic, returned, killed all the wizards and plundered and destroyed the school. Parn gets angry that the wizards didn’t fight back and Woodchuck, who is having breakfast at the inn, mocks Parn for his naivete.

Chapter 5: Woodchuck tells a tale of how it wasn’t Wagnard that plundered the school but some unlicensed thieves and how the guild wants them punished. Woodchuck claims to know where the plunder is but that it is now guarded by minions of Emperor Beld. The group goes off to investigate. Slayn and Deedlit confront a dark elf while the other explore the inside of the manor.

Chapter 6: Deedlit, Slayn and Woodchuck defeat the dark elf. Inside, Parn and Ghim kill 3 soldiers of Marmo and find a plan that looks like an attempt at assassinating the King of Allania. They find a magically sealed door. The room doesn’t hold any of the schools books but there is a note signed by Karla and a picture of her upon the wall. Ghim seems to recognize it. The group brings the plan to the King and the assassination is thwarted. Woodchuck asks to join the group. The chapter ends with Allania finding out about Beld’s invasion and due to an alliance made in the previous war, they must come to Kanon’s assistance.

Chapter 7: Allania has decided to barricade themselves in against Beld instead of fighting against him. Parn gets angry and tells everyone he’s going to Vallis to see if that kingdom will mobilize against Beld. His only way to Vallas, though, is through the Forest of No Return. Deedlit guides them through the Forest and reveals to Slayn that she is one of the last existing High Elves.

Chapter 8: Karla is reciting how the gods themselves warred and brought destruction to the land and how even now humans fight amongst themselves for more and more power. Her goal is to put a stop to the fighting and destruction, everywhere. Beld reveals to Wagnard that his fight is personal against King Fahn of Vallis. Parn and Gang are on their way to Vallis when they meet Karla,who has kidnapped Fianna, daugher of Fahn.

My memories of the Record of Lodoss War start with the anime and the original 13 episode OVA. The manga came much later. In all honesty, it is probably a good thing.

This is basically a Dungeons & Dragons campaign scenario. You have The Group with your various “character types” and an overarching campaign goal of stopping Beld’s invasion, while each individual character has their own little sub-goal.

The style itself is different enough from the anime that it was a bit jarring at first. The noses are much snubbier and everyone isn’t as streamlined as in the anime. Rougher is probably the best word. It’s not bad by any means just different.

I read these 8 chapters in one collected volume, but the original manga was released in 8 comics and THOSE covers were gorgeous! I’ve included one as a sample.