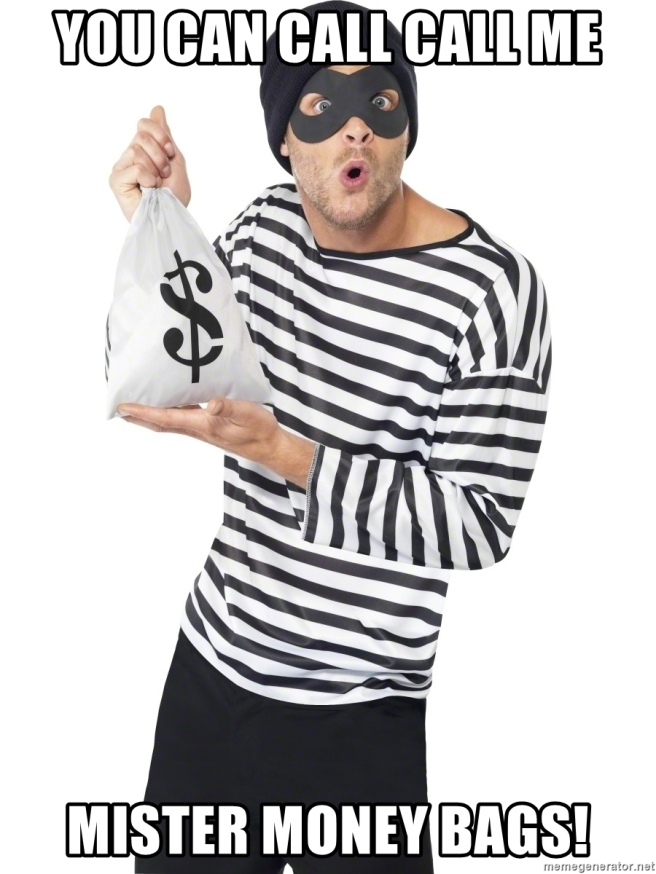 Back in my single days I spent my nights, not being a masked vigilante of justice, fighting crime and freeing the oppressed but as the Super Villain known and feared the world over as Mister Money Bags.  No bank was safe, no company president truly slept the night through, for all worried that Mister Money Bags might strike again. Walls were no impediment to me, safes I laughed at, security systems I danced the tango with. I was nigh unstoppable!

Once I got married though, Mrs B thoroughly disapproved of such things and outright refused to even consider becoming a Crime Spree duo. She said she’d rather own a llama. I, being the super genius that I am, immediately went out and bought the most bank robbering llama that money could buy.  The former owner ASSURED me that this llama was like the Van Gogh of bank robbing llamas. I would not be disappointed.

Sadly, for me, once Mrs B convinced Edward the Llama that bank robbing was bad,  he pretty much did this to me:

I was crushed.  My dreams of a team of bank robbers were gone.  Imagine, if you will, the following headline:

Bookstooge, Librario and Edward the Llama commit yet another impossible heist. Pope is stunned when he can’t find his hat.  World mourns. Authorities claim they “are closing in on the Terrible Trio”. Reward Offered.

That could have been me. Rocking my own personal Pope Hat.  However, being the bigger man, I am not bitter. I didn’t throw Mrs B out of the house. I didn’t even send Edward to the glue factory. In fact, with my help, he became something even bigger. You might recognize him. Just remember, he got there on the back of MY broken dreams.

So there you have it folks. How a hardened criminal was reformed by Love and made the World a better place in the process. And didn’t become bitter about it.

25 thoughts on “Bank Robbing VERSUS Llamas”