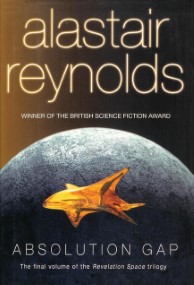 This review is written with a GPL 4.0 license and the rights contained therein shall supersede all TOS by any and all websites in regards to copying and sharing without proper authorization and permissions. Crossposted at WordPress, Blogspot & Librarything by Bookstooge’s Exalted Permission
Title: Absolution Gap
Series: Revelation Space #4
Author: Alastair Reynolds
Rating: 3.5 of 5 Stars
Genre: SF
Pages: 704
Format: Digital Edition

Quaiche is sent out to find sellable things for his Ultra masters and as it is his last chance, he’d better find something good. He finds a bridge on the moon Hela with an extinct species on it. He also finds a planet, Haldora, that randomly blinks out of existence. With his lover dying during this exploration, and a religious virus in his brain, Quaiche goes full on cult and starts a new religion based upon the planet’s disappearance.

Rashmika Els has grown up on the moon Hela and she is convinced that the extinct species, the Scuttlers, were not wiped out by the Inhibitors but by something else. Her brother had gone into the religious machine setup by Quaiche and Rashmika is determined to find him and prove her ideas. She gets embroiled in some plots Quaiche has going and it becomes evident that Rashmika has a lot of secrets of her own.

Scorpio the pig has been running things on the planet Ararat while Clavain has been off whining, sulking, do whatever the phracking loser has been sitting on his ass doing in the hinterlands. Unfortunately, when a one person craft comes to Ararat and disgorges Ana Khouri, things start to get complicated. Skade and the Conjoiners have been fighting Remontaine and his group of people. The Inhibitors are now involved and things are bad. Ana has a super baby (mentally) that Skade kidnaps. Skade crashes on Ararat, bringing the baby and the Inhibitors. The group on Ararat rescue Aura, the baby and then a group takes the spaceship and escapes into space. Aura tells them to go to Hela but Scorpio ignores her and heads back to Chasm City, only to see the whole system being infested and destroyed by the Inhibitors.

The Inhibitors are now making a push to wipe out humanity as a whole and Aura claims that only at Hela can Humanity’s salvation have a chance.

Everything comes together at Hela. Rashmika is actually Aura with her memories blocked and the disappearing planet Haldora is actually a machine for communicating with an alternate universe. The beings in the alternate universe claim they can destroy the Inhibitors if humanity will open the door for them. Everyone wants to let the Shadows through except Aura realizes it is a test by a third party. Humanity doesn’t let the shadows through and passes. They get help from this mysterious party and humanity begins to win the war against the Inhibitors.

The book ends 400 years after these events where Humanity is once again on the run from the Green Plague, a plague that turns all star systems into green globes and allows humanity to survive, but at the cost of any outward expansion. Very bleak.

Something about this book just didn’t grab me. Part of it is that the whole time frame thing really throws me off, even while making perfect sense. Without a FTL means of travel, events happen at greatly disparate times until they all come together. I think part of my issue is that Reynolds starts his threads so far apart that I feel like I’m reading 3 different novels at once and it’s not until the last 25% or so that they get tied together. I also don’t like the Conjoiners as specific characters, ie, Clavain, Skade, Remontaine, Aura, etc. As a group I find them fascinating but as individuals I almost universally hate them all.

For this book I found the ideas are what carried me along. However, at over 700 pages that is a lot of “idea” to drag along.

Overall, I just don’t have a lot to say. I am enjoying this Revelation Space but not nearly as much as Neal Asher’s Polity books. I am enjoying it much more than Banks’ wretched The Culture series though. I consider Asher, Reynolds and Banks the triumvirate of British SF for some reason and they’re ranked as I listed them. I have to admit, I was hoping that I’d enjoy them all equally but since they all write rather differently, that isn’t to be the case. At least I’m enjoying Reynolds enough to keep on reading his stuff.