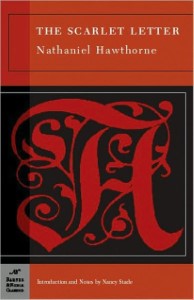 This review is written with a GPL 4.0 license and the rights contained therein shall supersede all TOS by any and all websites in regards to copying and sharing without proper authorization and permissions. Crossposted at WordPress, Blogspot & Librarything by Bookstooge’s Exalted Permission
Title: The Scarlet Letter
Series: ———-
Author: Nathaniel Hawthorne
Rating: 1 of 5 Stars
Genre: Classic
Pages: 272
Format: Paperback Edition

Hester Prynne, a widow whose husband is presumed lost at sea, is arrested for adultery when she becomes pregnant. She refuses to name the father and has to stay in a jail until she gives birth. Once she is freed, she is forced to wear a scarlet “A” on her clothing. Hester raises her little daughter Pearl on her own and lives in the outskirts of the village. She sews for her living and does good deeds to both rich and poor. Pearl grows up wild and untamed.

At the same time, an Arthur Dimmesdale, a preacher, is rising up in the ranks of the village. He is overcome by a sickness and an itinerant medicine man stays to help him get better. Turns out the medicine man is Hester’s husband, an old sour man who vows he will find out who Hester committed adultery with and destroy that man. Taking care of the minister gives him the excuse to live in the village. Hester agrees to keep Roger Chillingworth’s secret for her own reasons.

Years go by and Reverend Dimmesdale is getting worse. Roger has figured out it was Dimmesdale who committed the sin with Hester and has been slowly destroying his spirit. Dimmesdale meets Hester in the words and they agree to flee the village and start life together back in the Old World. They are going to escape, with Pearl, on a ship after the new governor is sworn in. Roger discovers their plans and orders a berth on the same ship and lets Hester and Dimmesdale know. Dimmesdale gives a sermon and then confesses his sin and acknowledges his lust for Hester and that Pearl is his daughter. He then dies.

Hester and Pearl sail off and many decades later Hester returns to continue her life of good deeds until she dies.

My goodness, Hawthorne really hated the Puritans and anything that actually had some moral backbone. Ok, got that out of my system.

This book starts out with some piece of garbage fictional “recollection” from Hawthorne’s working experience (where he had to work a whole 3.5hrs a day, the horror!) which is where he “discovers” the story of the Scarlet Letter. It was boring and rambling and had no impact beyond allowing the author to write long and complicated sentences while still saying nothing.

I don’t know the correct term, but Hawthorne definitely appears to be a Utopian Romanticist. Basically, if it feels good, it is “Good” by definition and therefore the right thing. There are several references to Hester and Arthur’s adultery actually being something from Heaven as their love sanctified their sin. This kind of absolute trash talk is why I didn’t finish the Monstrumologist series. There is nothing holy or sanctified about adultery or other sins. So that was a huge strike against this book.

Then the writing style almost bored me to tears. While I can handle long descriptions from Dickens, what Hawthorne writes is simply convoluted for convoluted’s sake. It became extremely annoying and by the end of the book I was ready to toss this paperback into the garbage. If you want to follow all the permutations of sentence construction then this is the book for you. There are almost no straight lines.

Thankfully, I read this during my lunch breaks at work, so it was broken up over 2 months. If I’d had to sit down and read this in 2 days I would probably have hunted down Hawthorne’s grave, dug him up and urinated all over his corpse. The opposite of Holy Water, as it were.

Needless to say, I won’t be reading anything else by Hawthorne ever again. What a wanker.