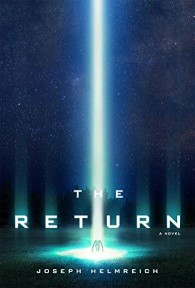 This review is written with a GPL 4.0 license and the rights contained therein shall supersede all TOS by any and all websites in regards to copying and sharing without proper authorization and permissions. Crossposted at WordPress, Blogspot & Librarything by Bookstooge’s Exalted Permission
Title: The Return
Series: ———-
Author: Joseph Helmreich
Rating: 2 of 5 Stars
Genre: SF
Pages: 256
Format: Digital Edition

Andrew Leland was abducted by aliens on national tv. Six years later, he is found wandering in the desert but claims to have no memory of ever being abducted.

College student, and genius, Shawn Ferris practically worshipped Leland for his ideas in whatever science they both are in. But being a Millennial, Shawn doesn’t believe that Leland has any right to keep his experience a secret. So he begins a correspondence under false pretenses and discusses theory and such stuff with Leland. Shawn then hunts Leland down only to be abducted himself by a super secret agency that Leland ran away from.

Shawn is convinced to work for them to help defend Earth against an alien invasion. But when he is chased and shot at by security for not toe’ing the company line, Shawn realizes somethin is off. On the run, Shawn is rescued by Leland and together they try to avoid detection by Ambius. It turns out Leland built a protective barrier for the aliens to keep humans out and Ambius used Shawn to reverse engineer it and figure out how to invade the aliens planet. Meanwhile, the aliens want to invade Earth to put a stop to the threat that humanity poses but they can’t because of the barrier. So when Ambius invades, they’ll be opening Earth up to an invasion as well.

Shawn and Leland kill some people, steal the artifact that it was all about and Shawn destroys the artifact. Leland realizes too late that the artifact is actually the alien he was in love with while on the planet.

What a piece of trash this was. While I noticed absolutely nothing wrong with the grammar, etc, both Shawn and Leland are Grade A jackasses. And since they are the supposed good guys, you can imagine what the bad guys are like.

Shawn is a know it all, butt hurt little prick. His insistance that Leland has no “right” to keep what he knows to himself is the epitomy of everything I despise today. Privacy, phhhh. I did not like Shawn at all. Leland was even worse though. He was super powered due to something the aliens had done to him and could almost literally walk through a hail of bullets but all he could think about was his lost alien love back on Planet X. He wouldn’t talk, he wouldn’t even try. He just wanted humanity to die. He made the choice to come back and then does nothing but wish he had stayed.

I enjoyed the idea of the story and if the characters had been more likeable or sympathetic, I probably would have enjoyed this and recommended it. But as it is, I won’t recommend this to anyone and will be staying away from anything that Joseph Helmreich may write in the future.