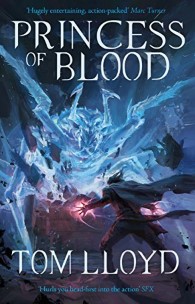 This review is written with a GPL 4.0 license and the rights contained therein shall supersede all TOS by any and all websites in regards to copying and sharing without proper authorization and permissions. Crossposted at WordPress, Blogspot & Librarything by Bookstooge’s Exalted Permission
Title: Princess of Blood
Series: The God Fragments #2
Author: Tom Lloyd
Rating: 4 of 5 Stars
Genre: Fantasy
Pages: 545
Format: Digital Edition

The Cards head to another independent city state ostensibly as bodyguards for the Ambassador, but with Toil telling them to “be prepared”.

Some fool scholar has opened a mystery in the city of Jarrazir that leads down into a duegar maze of mythic proportions. Legends hint of a stash of god fragments, but that is odd as the duegar pre-date the fall of the gods.

Sotorian Bade, working for the Knight Charnel in his role as relic hunter, leads a force of knights underground to recover the fragments. General Faril is leading a very visible attack against the city to distract everyone from Bade.

But Toil isn’t distracted. She has a vendetta against Bade since he left her to die in the Underdark all those years ago. With the very reluctant blessing of the Nobility of Jarrazir, Toil and some of the Cards head underground, along with the surviving student of the aforementioned fool scholar. Now in a race with Bade, both groups will be tested to the utmost in all areas: magic, brains and brawn.

Bade successfully carries off the god fragments but Toil realizes there is a greater treasure and the 7 survivors are imbued with some sort of magic that ties them together. Once upon the surface, they must work together, with the remaining Cards and other mercenary groups to throw back the Knights Charnel. This they successfully do.

Now Anatim must figure out just what his Cards are becoming and if it’s something he still wants to be in charge of.

I enjoyed this as much as the first book. On the plus, there were no “slow” times like I experienced previously. On the minus side, Lloyd goes into perverse immorality here. Sadly, I am letting my enjoyment dictate the outcome instead of dnf’ing this like I’ve done other books with such content. I’m sure it will happen again so I’m already preparing myself for stopping this series at the next such instance.

Lloyd likes to write a lot of setup. While the Maze opens in the first pages, neither the Cards or Bade actually go underground until after the 50% mark. It worked this time but there were times I felt like telling him to “get on with the story”. The maze reminded me of the movie Cube, just not quite so spectacularly violent and grotesque. I’m ok with that though. Sadly, the whole time in the maze felt a bit rushed. I do wish there had been more fighting or traps or monsters or something. Less backstory for that wretched Toil and more Maze death.

Lynx didn’t feel nearly as much the main character as he did in the first book. It seemed like Toil kind of bulled her way in and tried to take over. I don’t mind her as Lynx’s love interest or as a side character, but I don’t care for her as a main character. She’s simply “too much”. Lynx is a bit more believable. In a world where pieces of gods are used to make bullets I mean * rolls eyes at self *

We do find out a little bit of the history of this world and the fact that the gods might have been duegar. My initial thought on learning this was “what is this going to do to the psyche of the people if they learn their gods were nothing but jumped up dwarves?”. I have a feeling Lloyd is simply going to ignore that aspect of things. Just like he’s pretty much not written how the gods being dead and their carcasses being used affects people.

This does continue to get the profanity tag as well. F-bombs are used like mage bullets it seems.