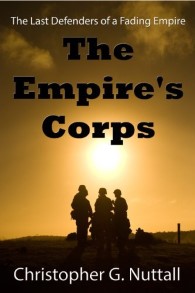 This review is written with a GPL 4.0 license and the rights contained therein shall supersede all TOS by any and all websites in regards to copying and sharing without proper authorization and permissions. Crossposted at WordPress, Blogspot & Librarything by Bookstooge’s Exalted Permission
Title: The Empire’s Corps
Series: The Empire’s Corps #1
Author: Christopher Nuttal
Rating: 3 of 5 Stars
Genre: SF
Pages: 505
Format: Digital Edition

Captain Stalker leads a disastrous rescue attempt on a slum on Earth and ends up with thousands of civilians dead. When he speaks “Truth to Power” (so help me my eyes almost rolled out of my head at the bloody cliched phrase) he and all 80+ of his marines are exiled to a planet on the rim of the Empire, Avalon. He is given a huge budget by the Marine Commander and very vague instructions.

The Empire is tottering and the rim planets will soon be on their own. Marine Commander hopes that Stalker and his marines can keep Avalon from falling into barbarity.

Once on the planet, Stalker is faced with the problems of an entrenched political/economic elite who want to keep thing the way they are even while that path is leading straight to revolution. Stalker deals with the bandits, then deals with the Opposition forces and the Council all in one fell swoop.

The book ends with a Space Navy ship dropping off a note telling Avalon that the Empire will be sending no more ships to them for the foreseeable future.

PG’s Rambling has been reviewing this series on and off even though he’s more of a spaceship kind of guy while I prefer the ground pounder action. And that is exactly what this book, and series I assume, is all about: Space Marines during the decline of a galactic empire.

Let’s get the negatives out of the way first.

“Truth to Power”. For fracks sake, responsible people don’t use that hackneyed phrase, only people like the Occupy movement, ie, those with too much time on their hands and no drive to actually support themselves. Thankfully, it was only used 2-3 times but that was just 2-3 times too much. Nuttal also writes about homosexuality enough that I won’t be surprised if I end up dnf’ing this series in another book or two. Thankfully here it was not “PC homosexual character spewing modern liberal cant, CHECKMARK”. He also writes about brothel’s and prostitution and they are both legal in this book universe. One of the characters opines “It’s ok as long as they “want” to get into that business”. It never works that way and always ends up as a legal sex slave trafficking. I was more concerned about the attitude behind it than that it was included. There was also one sex scene that was used as a plot device, so I can’t accuse it of being completely gratuitous, but another one like it in any future books will push this out of bounds for me.

80 highly trained marines on a backwoods world. Nuttal makes as much hay with this as he can and I loved every second of it. They are like wolves going through a pack of puppies.The fighting was awesome and Nuttal doesn’t make the mistake of writing the bandits or Opposition as complete chowderheads. They are clever and when they have armaments equal to the Marines, a real threat. One thing I was kind of edgy about was how the bandits raped a lot and it was definitely used as a device to make them “Despicable”. It was never described in detail but I just found it bordering on the tasteless with how it was written.

The politics side of things felt a little too pat and easy but considering that Captain Stalker has had to deal with Earth Politics, whatever Avalon throws at him isn’t nearly at the same level. I do appreciate that Nuttal doesn’t try to make his badguy characters to be grey, ambiguous “oh, those poor misunderstood” type of badguys. They are bad, period. Thank goodness for that.

Nuttal is an indie, as far as I can tell, but besides the repeated misspelling of “deport” and its various forms, nothing stood out (depot and depoted were the main culprits). At 500 pages, I was expecting a lot more than that in all honesty. I enjoyed his writing style and his characters had enough depth so they were unique and not just the same character with a different name.

I do look forward to reading more in this series (there are 14 books and it appears that book 14 is the final book) and if it works out, I’ll probably be trying other series by the author.