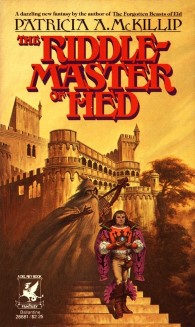 This review is written with a GPL 4.0 license and the rights contained therein shall supersede all TOS by any and all websites in regards to copying and sharing without proper authorization and permissions. Crossposted at WordPress, Blogspot & Librarything by Bookstooge’s Exalted Permission
Title: The Riddlemaster of Hed
Series: Riddlemaster #1
Author: Patricia McKillip
Rating: 4 of 5 Stars
Genre: Fantasy
Pages: 229
Format: Digital Edition

Morgan, King of Hed, reveals, unwittingly, that he has beaten a ghost hundreds of years old at a game of Riddles and won a legendary crown, and possibly the hand of a princess. Unfortunately, this sets him on the trail of a riddle of himself and the 3 stars that adorn his head. He plans on ignoring the riddle and to settling down and ruling Hed, an island of farmers, but when his life and the lives of those he knows and loves are put in danger, Morgan realizes that he has to find the answer to the riddle.

His journey takes him to many a land and he learns how to shapeshift, to become as the trees and he finds a harp and a sword, both with the same 3 stars and all prophesied about millenia before. He finds that a threat that destroyed the Earthmasters is rising anew and now threatens all the lands again.

Morgan makes his way to Erlenstar Mountain, seat of the High One, the last of the Earthmasters. The book ends with him finding out that the High One is the High Wizard that destroyed all the other wizards and is also one of the Masters of Cathnard, the school of Riddling.

I can completely understand why I gave this 3 stars back in 2007. Morgan is one of those characters who fights against destiny more out of a mulish desire to be left alone and will make choices, no matter how bad, based on that mulish side of him. I still had issues with him this time around but it wasn’t nearly so bad, as I had a LOT of sympathy for the poor guy. I know I’d be the same way now.

The other reason is that this has touches of McKillip’s lyrical writing style but is trying to tell a straight on fantasy story and it can be hard to do that. Much more prose’y and so where I don’t mind the slow pace and hiding of information because of the poetry of her later writings, this didn’t have that advantage. I was frustrated at times where a character wouldn’t reveal info for no apparent reason. Since this was a re-read though, I know there is a reason and I just haven’t gotten to it yet. It is amazing how my attitude can change when I know that an apparent mystery isn’t just arbitrarily set forth but has a point by the author.

While the writing is more prosaical than her later stuff, I did not find that a strong point for this book. I’d also be hesitant to recommend this trilogy as a first try for someone new to McKillip. Let them taste the beauty of her writing from when she is more accomplished and then they’ll be able to appreciate what she has set forth to accomplish in this Riddlemaster trilogy.

Overall, I really enjoyed this with the occasional bout of frustration. I think I’m making the correct decision to not immediately dive into the second book but to wait until this trilogy comes back to its turn in the reading cycle. Time is a great ameliorator.