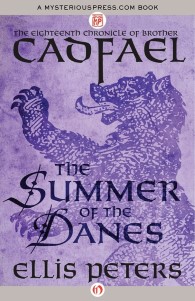 This review is written with a GPL 4.0 license and the rights contained therein shall supersede all TOS by any and all websites in regards to copying and sharing without proper authorization and permissions. Crossposted at WordPress, Blogspot & Librarything by Bookstooge’s Exalted Permission
Title: The Summer of the Danes
Series: Brother Cadfael #18
Author: Ellis Peters
Rating: 2.5 of 5 Stars
Genre: Mystery
Pages: 288
Format: Digital Edition

A new Bishop/Prelate/Priest/Authority Figure has been invested in an area long neglected along the Welsh border. Brother Mark has been sent with gifts from his boss to let the new guys know he fully supports them. Since Mark doesn’t speak Welsh, Cadfael goes along for the ride.

There are politics galore, as the New Boss isn’t Welsh and there are Welsh issues. Two brothers are fighting and one comes back with a bunch of Danes to take what he wants. The Danes end up with Mark, Cadfael and a young woman named Hellend as hostages. Thngs happen, some people die, money, power, blah, blah, blah.

The hostages are released, the Danes go back to Ireland and Hellend, who was to marry one of the men of the Good Brother, skips out of town to hook up with a big brawny Dane. Cadfael returns to his Abbey and realizes that he hasn’t really left the world behind. He still wants to travel.

It wasn’t that this was any worse than any of the previous books, but my goodness, I am getting thoroughly tired of these non-Cadfael adventures. Thank goodness there are only 3 more to go.

This book did convince me to NOT start another medieval mystery series when I finish up this one. I was contemplating the Sister Frevisse series but after barely making it through this book, I’ve realized I’ve reached my limit.

This was not bad by any means. It was just more of the same. Cadfael is a witness to the events, not an active participant. I am wondering about trying a completely different genre to replace these when I’m done. I’m already reading “Western” with L’Amours Sackets and I’ve got the SFF side of things more than adequately covered. Crime/Noir is not a genre I enjoy and while I’d like to get into some long running Action/Adventure/Thriller series, I’m not sure where to go. Eh, whatever. I’ll find something.