I have had some of these books in my possession since the late 90’s and haven’t read them since then either. So when my cousin told me her step-son was participating in a fund-raiser that used the weight of the item to generate funds, I knew I could kill 2 birds with 1 stone. Get rid of almost 25 books and since they are hardcovers, they are bricks and should generate some serious money.

I’ve got an actual Book Haul post coming in the next couple of days (yep, those books never stop coming in) so I figured why not do an Un-Haul post? I’ve mentioned Terry Brooks and his plethora of books to several of you so I know you’re deeply interested, hahahahahaa.

The Word and the Void trilogy. It was Brook’s first Urban Fantasy and everyone thought it was a standalone, until he decided to tie it into his Shannara series. Very filled with his Dualism philosophy.

The original Shannara trilogy with its after the-fact prequel.  Sword was a Tolkien clone. I enjoyed Elfstones the most of these four.

And this is where Brooks tied his Word and Void directly into the Shannara world.

Magic Kingdom for Sale/Sold.  Another series by Brooks and I really enjoyed this first book. Thank goodness for ebooks though *wink*

Each book gets progressively less appealing.

Then they get bad. There’s another book after these that I read but didn’t even bother to buy. It was that bad.

And here are all the books stacked up, with Earth: Final Conflict playing in the background.  I’m going to have to load these up into cardboard boxes and cart them downstairs. 3 flights of stairs, sigh. Well, better doing this little lot now than in another 10 years when there is 10 times as much.

And that’s what I call a serious Book (Un)Haul. I will leave you with this suitable quote from Vash the Stampede because I just love you all so much *wink* 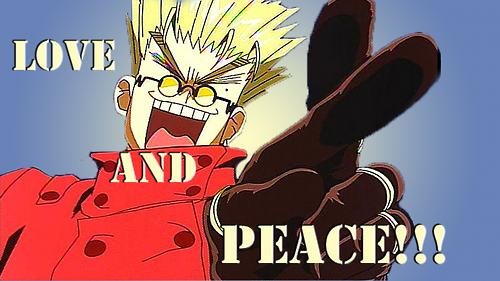 40 thoughts on “A Book (Un)Haul – The Terry Brooks Edition”