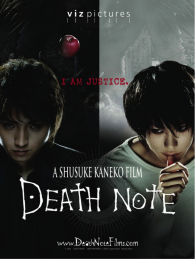 This live-action version of Death Note is part I. Parts I & II [titled Death Note: The Last Name] were released concurrently in 2006 by Viz Media here in the United States. It was originally produced and released in either Japan or Korea. [Korea produces live action adaptations of popular anime by the metric ton]

Anyway. Unlike the Netflix Death Note, this starts out with mysterious killings happening all over the world and the world calling the killer Kira and an avatar of Justice.

We then jump back in time and are introduced to Light Yagami, college student who has just passed the bar, is popular and good at sports. He’s the top of his class and his girlfriend is another bar examinee. They both want to eventually be police officers. Light becomes disillusioned with the justice system of Japan when he hacks into the police data base and uncovers a list of criminals who have gone free and will never be prosecuted. He goes to a bar to find out if this is true or not and comes across a child killer who got off. He runs off into the rain and throws his law book away. THAT is when he finds the Death Note and begins his cleansing of the criminal element around the world.

The police are trying to determine if this is some sort of plague when they are informed by the mysterious “L” that these deaths are not natural and are caused by an individual. L vows to bring this killer to justice and thus begins the game of wits between Light/Kira and L.

Now THIS is a much more faithful adaptation of the manga. First, Light is a freaking genius. He reads the rules of the notebook, knows how to use them, experiments to find the limits and generally shows what a heartless killer he really is. Second, the rules that Light uses are written out on the screen for the viewer to see, as he is using it. It explains what is going on. Third, Light narrates his reasoning, his logic behind his moves. Fourthly, Light maneuvers circumstances to maximize his use of the Death Note. Which leads right back to Number One.

L only plays a small part in this first movie. More of an introduction as Kira’s opponent than anything. He’s a weirdo and it’s not obvious at all if he’s actually a good guy.

Misa Misa is introduced in the last 10 minutes of the film as well. It is not apparent from her introduction what part she’ll play. Of course, if you’ve read the manga, you know 😀

The movie moves forward very dramatically. After the dramatics, Light ends up asking his father, the head of the Kira Task Force, to join said Task Force. L intercedes on his behalf. The movie ends with L eating from a bag of consomme flavored chips. The exact same kind that Light used to cover his killings while under observation.

Light knows that L knows that Light is Kira. But knowing is one thing. Proving is quite another. Let the battle of the brains begin in the second chapter, The Last Name. 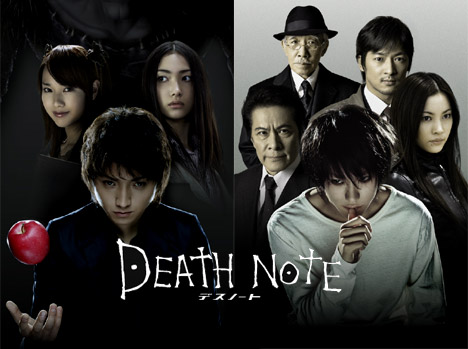 Cast of Characters from Death Note, Part I. Three of them are dead by the end of the movie. You’ll have to guess which three.