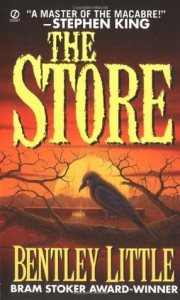 This review is written with a GPL 3.0 license and the rights contained therein shall supersede all TOS by any and all websites in regards to copying and sharing without proper authorization and permissions. Crossposted at Bookstooge.booklikes. blogspot.wordpress.com by  Bookstooge’s Exalted Permission.

And that is where I had to stop.

This book typifies Horror for me and why I don’t read it as a genre. I don’t have anything to say about the writing, or the story as a whole or anything else.

The 3 following happenings made me feel sick to my stomach and forced me to stop.

1) A sleazy young man is being interviewed to work at the Store. He’s taken to the video surveillance room and is shown the women’s dressing room, where he proceeds to watch the sister of the girl he’s sleeping with, try on new jeans. The manager tells him that sometimes the women aren’t wearing panties.

2) The aforementioned young woman applies to the Store. During her interview she is told that she’ll have to take a polygraph test, with only the manager in the room. He tells her to take her blouse and bra off so he can affix the electrodes to her body. She does. And the manager leers at her the whole time. Then she has to give a urine sample. In the office, in front of the manager. She does.

3) The young woman is hired. She comes early on her first shift and is taken down to the basement. She is told to strip down to her bra and panties and forced to run a gauntlet between other employees [most of whom she knows] who inflict physical and verbal damage on her. At the end, they all say they love her and she responds in kind.

Now, I don’t care if those instances are presented as wrong and bad, which they were. I don’t want to read about the degradation, humiliation, torture and complete helplessness of a young woman. I don’t want to invite the evil of that manager into my thoughts, and hence, into my house. That type of thing is sick and to use it for entertainment is sick as well.