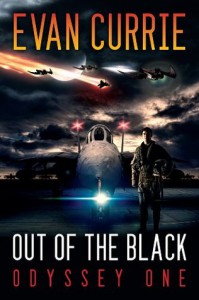 Title: Out of the Black

The wrap up to the Drasin alien cycle of the Odyssey One series. Earth must stand off something like 1,000 drasin ships while fighting against drones on earth itself.

The Priminae are refusing to actively engage to help earth and thus earth, finally united, faces its greatest threat ever.

This was a great wrap up to the series. In the previous book it seemed like earth was already gone when the survivors were sent to Priminae space. This books hows the battle that ensued between them leaving and them returning with Priminae tech.

I thoroughly enjoyed this. I have always preferred ground fights to space fights and this was full of that. The whole earth is the battle ground and to leave even one drasin alive is to risk it replicating and starting the war all over.

This ends on such a note that you could stop and be satisfied. Obviously, lots of questions remain about the drasin handlers and other aliens out there, but the drasin, as a threat, are done. That is a nice feeling.