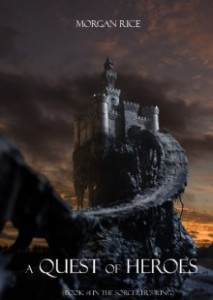 This review is written with a GPL 3.0 license and the rights contained therein shall supersede all TOS by any and all websites in regards to copying and sharing without proper authorization and permissions. Crossposted at Bookstooge.booklikes.blogspot.wordpress.leafmarks.com & Bookstooge’s Reviews on the Road Facebook Group by Bookstooge’s Exalted Permission.

Title: A Quest of Heroes

I am going to let part of the book’s official synopsis stand in here.

A Quest of Heroes revolves around the epic coming of age story of one special boy, a 14 year old from a small village on the outskirts of the Kingdom of the Ring. The youngest of four, the least favorite of his father, hated by his brothers, Thorgrin senses he is different from the others.

Sadly, this book was utterly and completely Amateur Hour.

The plot lifts heavily from David’s childhood (King David from the Bible) including sheep, sling, killing a big creature on his own, older brothers who join the army and getting the King’s attention in a very dramatic way. There is also the best friends for life with the King’s son and the romantic interest by the King’s daughter. Folks, trust me, this was David in an alternate world.

If that wasn’t enough, we have shades of King Arthur. There is a lone magician who advises the King and is Merlin pretty much in all but name. The King’s Daughter is name Gwen and there is a magic sword that only the Chosen One (I did not make up that capitalization this time) may lift and lead the Kingdom into glorious and eternal peace and prosperity.

The writing itself was clunky at best and downright childish at worst. I felt like I was reading a highschool play written by an earnest but incompetent english student.  The presentation of ideas and the movement of the plot from beginning to end was not even YA, more middle grade, as things happen simply because the author writes them that way, not because it is in any way feasible.

Finally, the version I read had over 300 pages and the official page count for the versions here is 234. So I’m guessing Rice did an edit job? If so, I’m not interested in reading a proofed version.

This was a waste of my time and I’m rather disappointed.