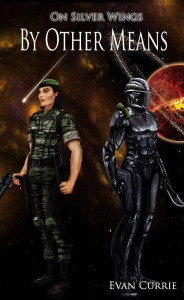 This review is written with a GPL 3.0 license and the rights contained therein shall supersede all TOS by any and all websites in regards to copying and sharing without proper authorization and permissions. Crossposted at Bookstooge.booklikes.blogspot.wordpress.leafmarks.tumblr.com by express permission of this reviewer.

The ‘War’ is over, Long Live the Cold War.

SOLCOMM is sending a ship and Diplomat to the Alliance, to hammer out the details of a cease-fire and to hopefully work towards a Peace.

Aida is sent along as Protection and to figure out how to exploit weaknesses in the Alliance so it doesn’t turn its attention towards Sol and her children.

So how is Aida supposed to protect the Peace while at the same time trying to figure out how to get around said Peace?

First off, Currie has gone and officially changed the series name to On Silver Wings, and made the change retroactively to all the books.

Phrack Me! and gold-darn those Indies…

Second, the writing was MUCH improved and the run on sentences strung together by commas, while still present, were not in force like earlier books. However, sometimes Currie got a little too carried away and completely lost me in what he was trying to convey. He probably knew exactly what he was saying, but it sure didn’t come across to me.

Thirdly, I liked the story. Not a lot of action, just like in previous books but enough to keep you reading. A bit of existential angst from Aida as she wonders how she will go on with all the death on her conscience, but it isn’t to much and feels tacked on to give her ‘character’ or ‘depth’.

Finally, I did enjoy this and do plan on reading more in the series as they come out. Wish Currie would release in other venues than just Amazon but I supposed that is where he’s getting most of his money.