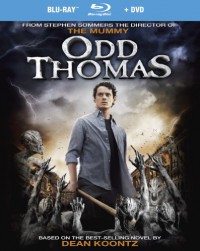 This showed up on Netflix, and while I’ve never read the books, it looked interesting.

Normally I’m not a fan of Urban Fantasy. I’ve quit the Dresden Files, the Iron Druid Chronicles and probably some more that didn’t even stick in my mind.

However, I enjoyed this a good bit more than I was expecting. Part of it was that Odd’s supernatural abilities didn’t overwhelm the thriller aspect of the story. Preventing a Small Town USA massacre has so many angles that it makes for a great plot point. And when you shroud even that with dead bodies, mysterious dreams, hell mouths and a veritable swarm of supernatural vultures, well, that is awesome.

I liked the guy who played Odd Thomas. He was humble, down to earth but not afraid to use what he knew. I found the whole ghost twist at the end interesting as well. I suspect most people saw it coming, but I wasn’t paying that much attention so it caught me square on the jaw, but in a good way.

Finally, the thing that made this a 4 star instead of just a 3 was that now I want to go read the books. When a movie pushes me to the source material, that is good. Now maybe if I’d read the books first and saw the movie then I’d be disappointed. But for ONCE I’ve seen the movie before I’ve read the books it was based on. That is a nice change for me.