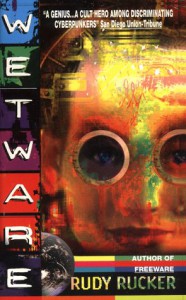 This review is written with a GPL 3.0 license and the rights contained therein shall supersede all TOS by any and all websites in regards to copying and sharing without proper authorization and permissions. Crossposted at Bookstooge.booklikes.blogspot.wordpress.com by express permission of this reviewer

Some years later after Hardware. Sta-Hi is now a Private Investigator, on the moon and drug free after accidentally killing his wife Wendy in a drug induced haze. Humanity has taken over the main Moon city and the boppers have moved underground.

This was just as well written, engaging, funny and seriously psychedelic as the first book.

The boppers have been pushed underground and are trying to survive. One group wants to mix bopper and human in a new synthesis called a Meatbopper. They kind of succeed, but don’t think through the scenario and so ultimately fail. Which leads a renegade human to invent a “virus” to destroy the boppers. Which in turn leads to a new lifeform of the boppers, kind of like a butterfly coming out of it’s chrysalis.

Rucker’s mind must be one messed up place to think up the things that happened in this book. And yet at the same time he must have a great mind, for he executes it perfectly. It is kind of scary actually, considering such a dichotomy of mind existing.

I’m not sure I’ve ever encountered something this odd before. Which is nice, to have a novelty, but I couldn’t live on a straight diet of such weirdness. First, I don’t want to become that jaded in my reading tastes. And Second, and in all seriousness, Robot/Human sex, even non-graphic, just makes me shudder.

One thought on “Wetware (Ware Tetralogy #2)”