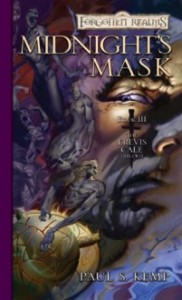 Erevis and Company must stop the Sojourner from fulfilling his evil plans of summoning the Crown of Flames, even though nobody except the Sojourner knows what it is.

First off, Riven isn’t the craven, two-faced hypocrite we were led to believe he is.

I actually enjoyed this more than I thought I would. There was fighting and magic galore. The Sojourner shows his true colors and while it was explained why, it still seemed like a cop out to me. A being of almost unimaginable power wants to walk on the surface of the world before he dies? It seems like there must have been easier ways. Oh well.

The whole “death isn’t really the end” that is used a lot in Forgotten Realms is thought about and the implications of bringing people back from the dead are brought to the forefront.

I also came across the first mention of the Netherese, who I know play a big part in the Sundering books currently being written.